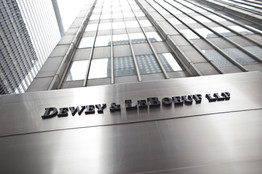 The team winding down the bankrupt New York law firm Dewey & LeBoeuf LLP intends to present its former partners, whose earnings are subject to clawbacks from the firm’s many creditors, with a plan to settle those claims in as little as two weeks.
Ex-partners from around the globe were briefed on the settlement’s progress during an hour-and-a-half conference call Tuesday afternoon with Dewey’s bankruptcy advisors and the two partners overseeing the dismantling of the firm.

By Jennifer Smith of WallStreet Blog