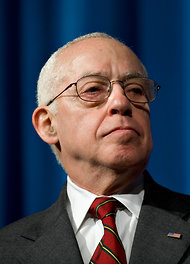 BY PETER J. HENNING
Saul Loeb/Agence France-Presse — Getty ImagesMichael Mukasey has testified before Congress on the Foreign Corrupt Practices Act.
The Foreign Corrupt Practices Act has been at the center of a tug of war between business interests and federal authorities.
The United States Chamber of Commerce has led efforts to change the law, in response to ramped up prosecutions by the Justice Department and theSecurities and Exchange Commission in the last few years. While the proposed changes are described as a means to “improve” the law, they would also make it more difficult to pursue cases.
But the revelations in The New York Times that Wal-Mart Stores squelched an investigation into bribery at its Mexican subsidiary may impel prosecutors to be even more forceful in applying the law and put legislative efforts to change it on the back burner.

To read more of the article click here: http://dealbook.nytimes.com/2012/04/30/taking-aim-at-the-foreign-corrupt-practices-act/